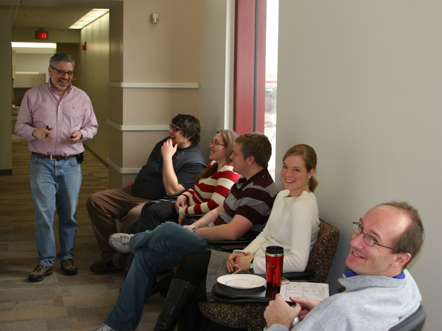 Dr. Edwin S. Levitan, Professor of Pharmacology, University of Pittsburgh
Levitan Lab website
Drs. Levitan and Horn are collaborating on research to understand mechanisms that control the firing properties of midbrain dopamine neurons and their alteration by drugs that are used to treat neuropsychiatric disorders.

Dr. Ian L. Gibbins, Professor and Head, Department of Anatomy and Histology, Flinders University, Adelaide, Australia
ian.gibbins@flinders.edu.au
http://som.flinders.edu.au/FUSA/Anatomy/staff/IanGibbins.htm
For ten years, Dr. Gibbins has been an influential consultant in our efforts to develop mammalian preparations and identify general principles that hold true in autonomic ganglia across phylogeny. Most recently, we have enjoyed grappling with the elusive role of dendrites on autonomic neurons.

Diek Wheeler Ph.D., Former Postdoctoral Fellow
wheeler@mpih-frankfurt.mpg.de
Diek made major contributions to our computational analysis of ganglionic integration and our intial efforts at dynamic clamping. He is currently working on the role of neuronal oscillations in Wolf Singer's group at the Max-Planck-Institute for Brain Research in Frankfurt/Germany.

Josh Beacom, Former Undergraduate Student
joshua.beacom@gmail.com
While an undergraduate at Carnegie Mellon University in Pittsburgh, Josh helped construct our first working prototype of a dynamic clamp using Labview-RT and hardware from National Instruments. Since graduating from CMU, Josh has been continuing his education in science.

Drew Headley, Former Undergraduate Student
headleyd@uci.edu
For his senior thesis in the Neuroscience Department at Pitt, Drew devised a project that revealed a new aspect of the cellular topography of neurons in the rat superior cervical ganglion. Drew is now a graduate student in Neuroscience at the University of California, Irvine.

Phyllis Pugh Ph.D., Former Postdoctoral Fellow
pcp@alumni.caltech.edu
Phyllis is currently an Assistant Professor in the Department of Neurosciences at the University of Toledo, where she continues to pursue her interests in the developmental role of neuronal nicotinic receptors.

Paul Karila Ph.D., Former Postdoctoral Fellow
paul.karila@astrazeneca.com
Paul conducted an important analysis of synaptic convergence in sympathetic B neurons and helped to formulate an important stochastic theory synaptic amplification that laid the groundwork for all of our subsequent computational work.  Paul is currently a group-leader in Research and Devlopment at Astra-Zeneca in Stockholm, Sweden.

Boris Gutkin Ph.D., Former Graduate Student
Boris.Gutkin@ens.fr
http://www.gnt.ens.fr/index.php?link=home.html
Boris helped construct our first computational model of a sympathetic neuron during a graduate student rotation. He went on to complete his thesis at Pitt with Bard Ermentrout and is now on the faculty of the Group for Neural Theory at the Ecole Normale Superiere in Paris.

WeiXing Shen Ph.D., Former Graduate Student
wshen@northwestern.edu
WeiXing is currently a Research Associate Professor in the Department of Physiology at Northwestern University. Since his graduate days at Pitt, WeiXing has continued to focus on neuronal electrophysiology. He is now actively engaged in the study of neuromodulatory mechanisms in the striatum.

Phil Jobling Ph.D., Former Postdoctoral Fellow
phillip.jobling@newcastle.edu.au
http://www.newcastle.edu.au/school/biomedical-science/staff/PhillipJobling.html
Phil worked on several projects during his postdoctoral fellowship in our lab. He made important contributions that elucidated how ganglionic modulation influences the control of cutaneous secretory glands and how nicotinic receptors modulate the ganglionic action of neuropeptides. Phil now has his own lab and is on the Faculty of Health in the School of Biomedical Sciences at the University of Newcastle in Australia.

Hermann Schobesberger Ph.D., Former Postdoctoral Fellow
Hermann.Schobesberger@i111srv.vu-wien.ac.at
http://movement-science.vu-wien.ac.at/staff.html
During his postdoctoral time in our lab Hermann was supported by an Erwin Schroedinger Fellowship from his native Austria. While in the lab Hermann conducted an elegant computational analysis of the interaction between excitatory nicotinic and muscarinic synapses on sympathetic ganlgia. This worked helped show that branched metabotropic signaling pathways can lead to functional synergy in neural computation. Hermann is now back at home in Vienna where is a researcher in the Movement Science Group at the University of Veterinary Medicine in Vienna.

Vladimir I. Skok Ph.D., Former Collaborator and Colleague
http://www.biph.kiev.ua/
Vladmir was Professor and Head of the Laboratory of Autonomic System Physiology at the Bogomoletz Institute of Physiology,in Kiev, Ukraine prior to his passing in 2003. During the last two years of his life, we had the pleasure of interacting with him during reciprocal visits between our labs.